Doubts about the origin of the mortar round fragments

In its first report, the Dutch Safety Board stated that the mortar round fragments showed that the detonator mechanism of the mortar round was unstable. As a result of moisture and heat, oxidation had taken place inside the mortar round. This in turn led to the formation of copper azide crystals in the detonator mechanism. Copper azide is a shock-sensitive, explosive substance, which caused the early detonation of the mortar round. This scenario was also confirmed by an ammunition expert, employed by the Defence Equipment and Support Division of the British Ministry of Defence, who prepared an independent report on behalf of the Dutch Public Prosecution Service.

The first investigation by the Dutch Safety Board revealed that the procedures for the procurement, management and use of ammunition within the Defence organization did not comply with the organization’s own guidelines. Following the fatal accident in Mali, the remaining around 10,000 rounds were removed from service and are still awaiting dismantling. To this day, it is important that the safety and health of the Defence employees involved in the dismantling process be safeguarded. In the light of the history of this fatal accident, it is recommended that the Minister of Defence periodically informs the Dutch House of Representatives about the progress of the dismantling process and the quality improvements in ammunition management procedures.

The Dutch Safety Board has found in 2017 serious shortcomings in the concern for the safety of Dutch military personnel during the mission in Mali, both with regard to management of the ammunition and to military healthcare. Previous investigations conducted by the Board have brought similar patterns to light. Therefore the Board is concerned about the Defence organisation’s virtually indiscernible motivation to learn from events.

A culture of safety and safety awareness form important pillars for a safe defence organisation, in the Netherlands and beyond. The Minister of Defence is ultimately responsible for this matter.

The Board issues the following recommendations to the Minister of Defence.

1. Ensure risk management is suitable for the current and future deployment of Dutch armed forces. Implement the changes necessary to form an organisation that actively learns.

2. Prior to taking a final decision about participating in an international military mission, as well as when changes to missions occur, clarify whether, and in which way, the safety and health of the military personnel to be deployed will be safeguarded. Make this safeguard a prerequisite. Fulfil the role of ultimate responsibility for the safety and health of Dutch military personnel during international missions by, for example:

3. Improve care for weapons and ammunition so that they are suitable for use in the conditions that may occur during missions. In particular, ensure that: 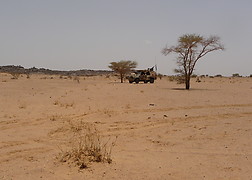