During take -off from runway 24 at Rotterdam Airport a Transavia airlines Boeing 737-800 pitched nose-up just after take -off thrust had been selected. The pitch up movement stopped when the aft fuselage and the tailskid assembly contacted the runway. The crew rejected the take -off, after which the aircraft’s nose came down again to the ground. 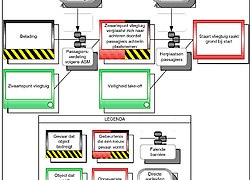