On Thursday 29 March 2018, at around 19.56 hours, an incident occurred in the airspace of Amsterdam Airport Schiphol. A Boeing 737-700, which was engaged in a go-around on Runway 18C, experienced an undesirable loss of separation from another aircraft, a Boeing 737-800, which had just started its takeoff procedure from runway 24. Because the two runways converge, the aircraft found themselves on a course which was set to intersect.

This occurrence is also the subject of a joint investigation by the parties involved, in the framework of the joint sector Integral Safety Management System (ISMS). The investigation and report have been concluded. All that remains is the decision-making on the measures to be taken.

Removal of the procedure from the Operations Manual

The procedure ‘Reduced separation during the use of dependent takeoff and landing runways’ of Air Traffic Control the Netherlands is used to increase the air traffic capacity of Schiphol. However, the use of dependent runways can create an undesirable and potentially dangerous situation under certain circumstances. Such incidents have occurred before. The Dutch Safety Board therefore issues the following recommendation:

To Air Traffic Control the Netherlands
1. Remove the procedure “Reduced separation between takeoff and landing traffic” from the Operations Manual and adhere to the standard procedure for using dependent runways.

Review of procedures in the Operations Manual

Because this procedure was established in the past, the Human Environment and Transport Inspectorate did not have to give permission for this procedure. It is not clear whether all procedures in the Operations Manual regarding dependent runway use, are compliant. The Dutch Safety Board therefore issues the following recommendation:

To the Minister of Infrastructure and Water Management
2. Have Air Traffic Control the Netherlands’ procedures regarding the use of dependent runways assessed against current legislation and regulations. 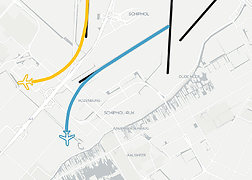