The Boeing 747-400 with registration TC-ACR was scheduled to make a cargo flight from Maastricht Aachen Airport in the Netherlands to King Abdulaziz International Airport in Jeddah. During take-off the aircraft veered off the runway. None of the crew was injured. The aircraft sustained substantial damage.

Besides the full report, a Dutch summary has been published.

The aircraft was scheduled to make a cargo flight from Maastricht Aachen Airport in the Netherlands to King Abdulaziz International Airport in Jeddah. After the aircraft was loaded, the captain, who was pilot flying, taxied to Runway 21 and initiated a rolling take-off. He advanced the thrust levers and, when the engines had stabilised, he pushed the TO/GA switches, causing the engines to accelerate to the selected take-off thrust.

The aircraft had accelerated to approximately 30 knots when the outboard engine on the right side (engine #4) suddenly lost power. The aircraft veered to the right due to the resultant asymmetric thrust. The thrust levers were not immediately retarded to idle, so this asymmetric thrust continued. Attempts to steer the aircraft back to the centreline by means of nose wheel steering and differential braking, were unsuccessful. The aircraft could not be controlled. It veered off the runway and continued on into the soft ground on the right-hand side of the runway. The resistance of the soft ground and the eventual retardation of the thrust levers caused the aircraft to come to a standstill. None of the crew was injured. The aircraft sustained substantial damage. The runway excursion was caused by prolonged asymmetric thrust, due to the loss of thrust on engine #4 at low speed. The loss of engine thrust was caused by a compressor stall.

Following the loss of thrust on engine #4, the crew did not respond as they had been trained for and their actions were not in accordance with the RTO procedures described in the manuals. Flight crews are trained to deal with unexpected rejected take offs due to an engine failure. However, the element of surprise in training in a simulator setting is very limited. The flight crews are aware that a failure is about to occur. This greatly diminishes the element of surprise during simulator sessions. As a result, the chance that the ‘startle effect’ occurs during the training is minimal. 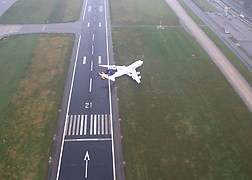