On 27 May 2017, there was a partial collapse at the building site of a new car park near Eindhoven Airport. No injuries resulted from the collapse. Construction of the car park was almost complete. In addition to parking facilities, the new building was also set to accommodate catering venues and a public transport terminal.

Construction is a complex process involving multiple parties at various times. Each party is responsible for a part of the construction process. However, responsibility for safety across the entire process is borne by all parties collectively. These parties are responsible not only for occupational health and safety and safety for the surrounding environment, but also for the structural safety of the building.

The ultimate consequence of taking insufficient care with regard to structural safety is that a building may collapse. This was the case on Saturday 27 May 2017, when part of the parking building near Eindhoven Airport collapsed. The building, which stood right beside the entrance to the airport, was one month away from final delivery. Workers had been working on the level that later gave way only a few hours before the incident; fortunately, they were unharmed. It was also a miracle that no passers-by were struck by debris, some of which fell outside the perimeter of the construction site.

Cause of the parking building collapse

Based on its investigation, the Board concludes that the collapse was the result of the design decision to rotate the ‘BubbleDeck’ slabs in the floor of the parking building one quarter-turn in respect to the orientation in which they are normally used, without recognising the consequences of this change.

The main result of the decision to rotate the slabs was that particular attention needed to be paid to the seams between the floor slabs. Such attention was not paid, however, with the result that insufficient reinforcement was given to the connections between the floor slabs at the level of the slab seams. The floor was thus unable to bear the loads. The floor was so vulnerable that the slight increase in the load on the floor resulting from the high temperatures on 27 May 2017 was enough to cause the floor to partially buckle. Failure to understand the consequences of the floor design was therefore the direct cause of the collapse. There were also failings in the implementation phase that were not recognised, but these were not a direct cause of the collapse of the parking building.

Accordingly, the parking building at Eindhoven Airport collapsed because the decision was made in designing the floor to rotate the floor components by one quarter-turn without considering the consequences. However, there were clear signs during the tendering process and in the implementation phase (including the formation of cracks and puddles) to indicate the presence of structural safety failings. At that time, none of the parties saw these signs as a reason to call the structural safety into question, although they could and indeed should have done so.

In the opinion of the Safety Board, better risk management is needed in the construction sector to move towards actual safety improvements.

With this in mind, the Board makes recommendations in three areas.

The Safety Board makes the following recommendations: 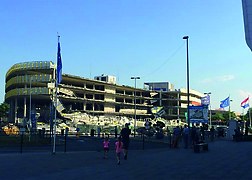