In the Netherlands, the New Year’s Eve is a celebration with a downside. People set off fireworks on a grand scale, causing hundreds of injuries every year. On average, since 2000, fireworks have caused the death of one person each year. Many of those injured – half of whom are bystanders – are scarred for life. Although the percentages vary from year to year, on average nearly half the victims are aged under 20. No other festival in the Netherlands causes as many injuries as the celebration of the New Year’s Eve. In addition, during New Year celebrations there are large-scale disruptions to public order, ranging from cars set on fire, rubbish containers destroyed and noise pollution to the use of violence. There are around 11,000 incidents in total.

The (potential) physical and material consequences of the use of fireworks and the disruption to public order also have a subjective side: they make people feel unsafe in their own communities. However, there is no simple solution that will resolve these New Year’s Eve safety issues. After carrying out its investigation, the Dutch Safety Board has determined that these problems need to be tackled on two fronts: fireworks and public order.

The full report has been published in the Dutch language.

The Dutch Safety Board sees a need for structural improvements in safety, with the aim of substantially reducing firework-related injuries and disruption to public order. The recommendations focus on: 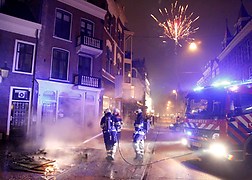