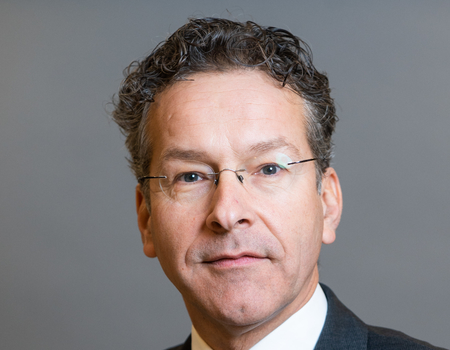 Jeroen Dijsselbloem graduated in Agricultural Economics from Wageningen University in 1991 and began his career as a policy officer for Agriculture & Environment at the European Parliament and for the parliamentary group of the Dutch Labour Party (PvdA). From the end of 1996, he worked closely with the Dutch Ministry of Agriculture, Nature and Food Quality on its strategy to combat swine fever and its response to a series of food scandals. Dijsselbloem held this position until 2000, when he was sworn in as a Labour MP in the Dutch Lower House and became the party’s spokesman on issues ranging from taxation, migration and integration, to education and youth care. In 2012 he was appointed Minister of Finance in the newly elected Labour-Liberal coalition government and from the start of 2013 also served as Chairman of the Eurogroup, the consultative body for the eurozone’s finance ministers. He held both positions for five years. On 1 May 2019, he succeeded Tjibbe Joustra as chairman of the Dutch Safety Board.