Emergency landing after loss of engine power, Cessna 208B, west of Teuge Airport . On 25 June 2021

The aircraft took off from Teuge Airport with 1 pilot and 17 parachutists on board. Shortly after take-off, the aircraft lost engine power, after which the pilot made an emergency landing in a meadow. The aircraft collided with a billboard with the right wing, then made a ground swing and came to a stop against the crash barrier next to the highway. The aircraft was heavily damaged. One parachutist was slightly injured. 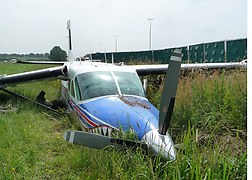