Fatal outcome following parting of mooring line - Lessons learned from the accident on board the RN Privodino . On 28 June 2018

On 28 June 2018 , the chemical tanker RN Privodino entered the Noordersluis lock at IJmuiden. The vessel was en route to Amsterdam. Shortly after the port forward spring had been paid out, it unexpectedly came under severe tension. The mooring team on the foredeck was no longer able to respond adequately in good time, as a result of which the mooring line parted. The section of mooring line that was connected to the on-board winch recoiled, and struck a crew member, killing him instantly.

Safety measures could not prevent accident

Accidents caused by parting mooring lines are common in the shipping industry. Therefore, safety management measures have been developed and implemented to act as so called barriers. In the report, four failing barriers are identified which led to the fatal accident. These barriers are:

The Dutch Safety Board issues the following recommendations:

With the aim of preventing the breaking of mooring lines in the lock in IJmuiden:

1. After consulting with all stakeholders, formulate an ambitious target aimed at drastically reducing the number of broken mooring lines;

2. Take control in the redesign of the procedures relating to the precise determination and reaching of the final mooring position in the lock.

In respect of good cooperation on the bridge between regular members of the bridge team and the registered pilot:

To SCF Management Services Dubai and the pilotage service:

3. Ensure that it is clear to all persons involved how the lock passage will be undertaken. Make a precise agreed and verified determination of the final position in the lock.

4. Ensure that whenever agreements are reached on board about the distribution of tasks during sailing and manoeuvres, these agreements are respected and that they do not conflict with the formal role and responsibility of the various persons involved according to their own discipline.

With regard to safe working with mooring lines on board:

5. Ensure that during mooring line handling, crew members only undertake tasks after they have been issued with the appropriate instructions by a superior. Ensure that a start is only made on placing mooring lines under tension following the issuing of an instruction by the ship’s officer in command on the bridge.

6. Ensure that officers who are expected to physically supervise the safety of crew members are always able to give priority to this task.

With regard to safe working with mooring lines, a turnaround in thinking is also needed. Whereas at present the intention is to ensure that measures for working safely in unsafe areas are carried out as well as possible, working with mooring lines and ropes must be organized in such a way that at high risk moments, it is possible to work from a safe location and unsafe areas no longer need to be entered.

To achieve that objective the Dutch Safety Board issues the following recommendations:

8. Broadcast this turnaround in thinking as widely as possible in your national and international network, and investigate how, in practical terms, the maritime sector can contribute to achieving the objective of only working from safe workstations while handling mooring lines. 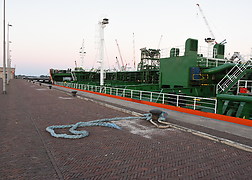