On Sunday 12 July 2020, a single seater glider took off from Gilze-Rijen Air Base by making use of the winch launch method. At an altitude of approximately 200 metres, the cable disconnected prematurely. Witnesses saw the glider lower its nose and a transition to a right hand turn with a steep angle of bank. The glider then attained a nose-down attitude and started to rotate. After approximately two full rotations in the nose-down attitude, the glider crashed into the ground and came to rest upside down. The pilot died due to fatal injuries.

During maintenance of the glider, a repair was made on amongst other things the cable release mechanism. After that the glider was made available for flight operations. Nobody then realised that the glider encountered three premature cable releases during winch launches on the same day. This occurred on the day before the accident flight. Premature cable releases were not specifically mentioned in the club’s rules as occurrences that should be reported. The club’s safety management system did therefore not ensure that it was detected that the same malfunction occurred three times with the glider and did not ensure subsequent communication about it within the club.

By not grounding the glider immediately after the initial premature cable release without clear cause, the malfunction of the cable release mechanism continued to exist and premature cable releases continued to occur. This, in combination with the allocating of the glider to a pilot with a lack of recent experience on single seater gliders, created a situation in which the accident could occur. The club’s safety management system did not ensure that such a situation was prevented from happening.

This investigation emphasises the importance of everyone participating in glider flight operations realising that small defects on a glider can have an adverse effect on flight safety. If there is any doubt pertaining to issues concerning critical functions, such as related to the takeoff, the glider should be taken out of flight operations for further inspection and should not be flown until it is determined that the glider can be safely operated.

The Dutch Safety Board therefore issues the following recommendation:

To the Royal Netherlands Aeronautical Association:

Bring the lessons from this accident to the attention of the Dutch gliding clubs and point out to them that:

1. A club’s safety management system must be organised in such a way that occurrences that possibly imply critical malfunctions are recognised, reported, and immediate action is taken on it. A club must stimulate everyone who participates in flight operations to report these type of occurrences.

2. A club’s safety management system must be organised in such a way that the members’ recent flying experience is taken into account when allocating a glider to a club member. 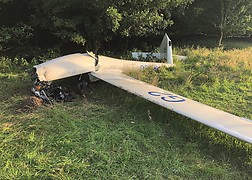