Fall from height - Fatal accident on board Fortunagracht . On 16 February 2018

On 16 February 2018 a crew member on board the Dutch cargo vessel Fortunagracht entered the ship’s hold to search for lashing equipment. During the search, the deckhand fell from a height of 12 metres through a door opening into the hold, suffering serious injuries. Later that day, the deckhand died as a result of those injuries.

No additional barriers to prevent fall from height

The Fortunagracht dropped anchor near the port of Puerto de Sucre in Venezuela, while waiting to load containers at the quayside. The crew prepared the ship for the loading work, while at anchor. The weather conditions were good, so the work could be carried out using the ship’s cranes.

During preparation of the holds, it became clear that there was a shortage of lashing equipment, and the victim went in search of additional equipment. During this search, he entered a stairwell where the lighting was not switched on so the area was in almost complete darkness. To compensate for this the deckhand borrowed a torch from another crew member, so he would be able to see what he was doing. Shortly afterwards, crew members working elsewhere in the stairwell heard a scream  from the hold. When the lighting was switched on from the bridge, they found the severely injured deckhand on the floor of the hold.

After rendering first aid, the medical evacuation was initiated and the victim was disembarked onto a boat belonging to the Venezuelan port authority and taken to hospital, on shore. The deckhand died at the hospital as the result of internal injuries.

On ships with the possibility of adapting the deck configuration depending on the cargo to be carried, the situation must not be permitted to arise in which doors leading to the hold are not fully closed and locked prior to the removal of the decks (pontoons). This must be strictly supervised. The Safe Working Manual on board the Fortunagracht was sufficiently clear in specifying this requirement, but supervision of actual implementation proved insufficient.

Moreover, it emerged from the investigation that at the time of the accident on board the Fortunagracht, no additional barriers were available for preventing a person stepping and/or falling through a door behind which there was no tweendeck.

The Dutch Safety Board issues the following recommendations to the Spliethoff Bevrachtingskantoor B.V.: 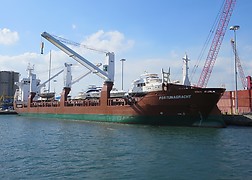