The pilot, in possession of a Commercial Pilot Licence (CPL), was involved in a private flight on board the RV-8 (a home-built aircraft) from Mühldorf am Inn airfield in Germany to Kempen Airport in the Netherlands, where he landed on Runway 03 at 09.45 hours. The pilot had more than 5,950 hours flying experience, of which 220 hours on the RV-8 type. Recorded at the nearby Belgian air force base Kleine Brogel, the prevailing wind was blowing in an easterly direction, at a speed of 8 knots. According to the pilot, during the runway roll-out at a speed of approximately 30 knots, the wind suddenly caused the aircraft’s nose to change direction. Despite the pilot’s attempt to correct the steering, the aircraft left the runway and the left main landing gear broke off. The pilot was unharmed.

This accident was published in the Quarterly Aviation Report over the 3rd quarter of 2020. 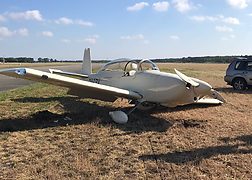