Over the past few years, hundreds of thousands of farm animals have died in barn fires. In the period between 2012 and 2020, there were on average 37 barn fires each year, in 17 of which animals died as a result. On average, 143,000 animals died each year, representing a total of almost 1.3 million. The consequences of a barn fire are often disastrous for the animals housed in the animal accommodation, and are also far-reaching for the livestock farmers. The animals burn alive, suffocate by smoke inhalation or suffer serious injuries. As a result, barn fires often awaken an emotional response from society.

Each year, on average, animals are killed in around 17 major barn fires. In the period 2012 through to November 2020, this led to the death of almost 1.3 million animals. The number of animals killed in barn fires is growing year on year. The Safety Board believes that this trend, that goes hand in hand with considerable animal suffering, must be reversed. 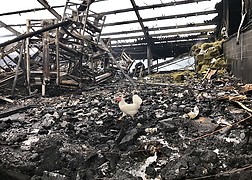