While training for formation flying, the two aeroplanes collided with each other. As a result, one aircraft became uncontrollable and crashed, both occupants got fatally injured. The other aeroplane got damaged and was able to make an emergency landing. The pilot received minor injuries; the passenger remained unharmed.

Mitigating measure of fixed altitude separation was not effective

The investigation revealed that during the rejoin of the new formation manoeuvre, the wingman (PH-VCY) closed in from behind at the right side with a higher airspeed, before colliding with the leader (PH-RED). It was determined that technical factors did not contribute to the cause of the accident. Both pilots had a valid pilot licence, display authorization and medical certificate.

The formation team practiced a new formation manoeuvre that had the inherent risk for the pilots of not being able to adequately keep each other in sight during the rejoin phase of the manoeuvre. Even though the hazard of losing sight was recognized by the two pilots, who were proficient in formation flying, the mitigating measure consisting of a fixed altitude separation of 100 feet was not effective to ensure the safety of the formation during the rejoin. Even with an applied altitude separation as a measure to avoid a mid-air collision, the new formation manoeuvre was by its design unsafe to perform. 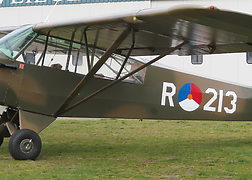 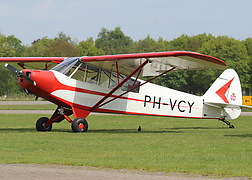