During the daily inspection and the pre-flight check of the glider, the pilot did not notice any particularities. After takeoff, he made a cross country flight, after which he returned to the airfield for landing. The pilot stated that, on final approach for Runway 05R, he pulled the air brakes control lever, after which only the left air brake of the glider opened. The pilot was able to control the asymmetrical flight condition and decided to make a long landing in the field, since the target landing area would be overflown due to limited airbrakes operation. On touchdown the right air brake opened, after which the right wing dropped, which was followed by a ground loop. The glider suffered some damage. The pilot remained unharmed.

This serious incident is described extensively in the quarterly aviation report over the 4th quarter of 2020. 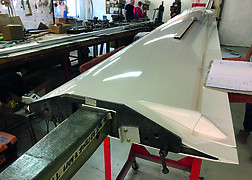