On 1 April 2019, shortly after midnight, a Swiss river cruise ship, the Viking Idun, collided with a Maltese chemical tanker, the Chemical Marketer, on the Western Scheldt, near the Put of Terneuzen. There were 171 passengers and 49 crew members on board the river cruise ship. There were 22 crew members on board the chemical tanker, which was laden with a cargo including benzene, heptane and methanol. A number of passengers on board the Viking Idun suffered minor injuries as a result of the collision, and the damage to both ships was considerable. Both ships were able to reach port following the collision, with tug assistance.

On 1 April 2019, shortly after midnight, a collision took place on the Western Scheldt between the Swiss river cruise ship Viking Idun and a Maltese chemical tanker. Both ships suffered considerable damage. There were 171 mainly elderly passengers and 49 crew members on board the cruise ship. At the moment of the collision, the majority of passengers were sleeping in closed cabins, and a number suffered minor injuries as a result of the impact. The chemical tanker was transporting a cargo of benzene, heptane and methanol. The collision tore a large hole in the outer skin of the tanker. The use of double-walled tanks for the storage of chemicals prevented the spillage of very toxic substances.

Competence of crew not tested

The river cruise ship Viking Idun was in compliance with all statutory requirements for river cruise ships. The crew members were also in possession of the necessary certificates to allow them to sail in Dutch waters. Nonetheless, the Safety Board notes that these statutory requirements are not always sufficient. The crew of the Viking Idun had insufficient knowledge of the complex Westerschelde navigation zone. They also had insufficient command of the English language, as a result of which communication by VHF marine radio was poorly understood. In addition, for the passage of the Western Scheldt, the captain decided not to place those crew members with the most extensive knowledge of the navigation zone on the bridge. The decision was also taken to not call in the assistance of a pilot. The conclusion of the Safety Board is that, although the crew members were correctly authorized, they were insufficiently competent.

The Western Scheldt is one of the most heavily used areas of water in the world, where inland navigation traffic, sea shipping and recreational shipping come together, day and night. This intensive traffic, combined with narrow navigation channels, shallows, strong currents and tidal effects make this a high-risk navigation zone. The Safety Board concludes that despite the complexity of the area, the knowledge and competence of the crew members of inland navigation ships are not subject to any additional requirements. This differs from the situation in areas of comparable complexity, such as the Rhine.

The investigation by the Safety Board reveals that this collision was not a unique event. The growing popularity of river cruises demands improvement to the level of safety in this sector. Large numbers of passengers, many of them with limited capacity to cope independently, travel on these waters each year. Against that background, the Dutch Safety Board has issued recommendations aimed at improving safety in the inland navigation sector, and specifically the river cruise sector, in the Netherlands. A recommendation has also been submitted to the Minister of Infrastructure and Water Management to improve the effectiveness of the supervision of river cruise ships and to tighten up the competency requirements for crew members of river cruise ships in the Scheldt area.

In the river cruise sector, additional attention is needed for safety, especially in the light of the growth experienced and the large number of passengers transported on these ships. This need is further enhanced because many of the passengers have restricted capacity to cope independently. Against that background, the Dutch Safety Board issues the following recommendations:

To Viking River Cruises and other operators active in the river cruise branche:

1. Ensure that during each journey by a river cruise ship, a fully qualified and competent nautical crew is present on the bridge.

To the Joint Nautical Authority, the Minister of Infrastructure and Water Management and the Flemish Minister of Mobility and Public Works.

2. Tighten up the authorization and competence requirements for nautical crews on river cruise ships within the Scheldt area, making use of the option of including additional provisions in the Western Scheldt Shipping Regulations to ensure safe passage by river cruise ships. Possible provisions relate to familiarity with the navigation zone and/or the obligation to take a pilot on board, if this knowledge is not present. Also investigate whether these measures can be secured internationally.

3. Improve the effectiveness of supervision on river cruise travel:

4. Share the findings and lessons learned from this investigation within your national and international network, including the Ledengroep Personenvervoer. 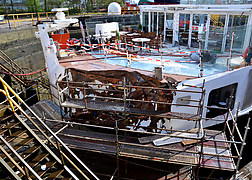 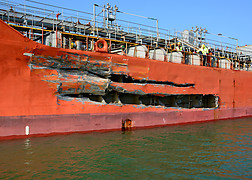