On 13 October 2018, the electric-powered aeroplane, an Italian registered Pipistrel Alpha Electro, departed from Drachten airfield and set course towards Stadskanaal airfield. The pilot was its only occupant. At the destination, he joined the aerodrome traffic circuit. In the circuit, after turning from downwind to base leg, the aeroplane suddenly lost altitude and impacted the ground. Shortly thereafter the aeroplane caught fire. The pilot was fatally injured. The aeroplane was destroyed as a result of the crash and the post-impact fire.

Level of safety and airworthiness not guaranteed

Since this was the first accident with an electric-powered aeroplane in the Netherlands and the first worldwide with a Pipistrel Alpha Electro, the Dutch Safety Board examined multiple aspects beyond the direct cause of the accident.

First it was found that there were technical problems with the batteries prior to the fatal flight. The investigation has shown that the batteries nevertheless played no role in the cause of the accident. The accident was caused by a low airspeed situation, close to the stall speed. This led to a stall followed by an incipient spin from which the aeroplane did not recover.

Third, in general when innovation is introduced, such as electric propulsion, one would expect the authorities to fulfil a proactive role. This role should safeguard safety in aviation. The Dutch Safety Board did not observe this role. For instance, regulatory requirements concerning electric-powered aircraft do not yet exist in the Netherlands.

Fourth, the fire hazard of lithium-ion batteries used in the propulsion of microlight aeroplanes is characterized by a fire with a high calorific value, the speed at which the fire develops, and the fact that such a fire is hard to extinguish. In this particular case, the fire department extinguished the fire in accordance with their instructions: copious water was used for a long time.

The Pipistrel Alpha Electro 167 and similar microlight aeroplanes, fall within the category of aeroplanes to which the European common rules on civil aviation do not apply (Basic Regulation, Regulation (EC) 216/2008, which was applicable when the aeroplane was registered, now replaced by Regulation (EU) 2018/1139). These aeroplanes fall under the regulatory control of the member states, in light of their limited risk to civil aviation safety, simple design, or operations mainly on local basis. However, microlight aeroplanes have
become more advanced and increasingly popular over the years and they are also operated across borders. With the growing numbers and the increasing complexity of the design of microlight aeroplanes, the Dutch Safety Board believes also for these aircraft a minimum level of safety within Europe should be determined.

The Dutch Safety Board therefore issues the following recommendations. 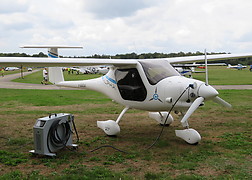