The Rolladen-Schneider LS 4-b, a single seat glider, made a local flight on 23 April 2018. At an altitude of approximately 1,100 metres the air brake control rod in the cockpit of the glider detached. From that moment on the pilot had little to no control of the air brakes and he decided to return to the airfield. The pilot used his right hand to hold the remaining part of the control rod and used his left hand to steer the aircraft. The landing was without any further problems. After the flight, it was found that the air brake control rod had become detached from the rest of the mechanism.

The involved glider was modified on 7 April 2018 in the flying club workshop as a result of an EASA Airworthiness Directive. During the subsequent analysis it was concluded that the wrong type of Loctite was used and the Loctite had expired 2 years ago. Furthermore, the weld in the air brake control rod was not removed by a 13.5 mm drill as required by the technical note of the manufacturer, but with another drill. As a result the control rod was limited in its movement, which caused a bending moment on the air brake control rod junction. The weld also put pressure on the threading of the bolt in the swivel. As there was insufficient thread locking on the bolt, combined with the repeated rotational movement of the airbrake handle (needed to operate the airbrakes) the pressure on the threading resulted in loosening of the bolt. Subsequently this led to a complete detachment of the swivel, as a result of which the air brakes could not be retracted completely anymore. The effect of non-functioning air brakes is that the descent angle on final can no longer be controlled with these brakes and it becomes impossible to land the glider in the usual way at the intended landing site. 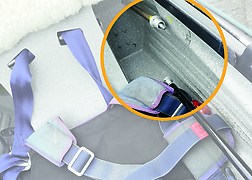